Appearance: Cigar has a beautiful overall appearance – small veins, no cracking or splits in the wrapper. Appears to have a smooth, tight very uniform roll from head to foot. Cap features a very tight pig tail finish. No splits or cracks at the foot. Overall beautiful appearance.

Construction: Pre-light the cigar construction is flawless; no cracks or splits, no soft spots or hollow points, wrapper has small veining, no bulges or bumps in the stick. Cutting is achieved without any fraying or peeling of the head and the remaining cap is tightly secured to the head. The pre-light draw is very smooth, not loose and not tight but a consistent flow which should be very conducive to smoking.

Lighting is very easy and the cigar quickly lights with a uniform burn. During smoking the burn remained very even, with no running whatsoever. Wrapper remained tight, no peeling or fraying during the smoke. Cigar did not crack during smoking. Head of cigar remained together without fraying or peeling during smoking.

Ash was a salt and pepper gray and fairly loose looking, not as tight of an ash as I would have expected. First ashing occurred at about 2 inches in and the cigar maintained ashing at about every 1 ½ to 2 inches. Does not hold ash as long as most other premium sticks I have smoked, however in my experience smaller ring gauges often do not.

Pre-Light aroma: The cigar smells almost as a chocolate bar but with a hint of spice and a little earth. There is a definite sweet and spicy smell about it, yet subtle, not overpowering. A very pleasant smell making me eager to light it up so I can taste it.

Beginning flavor: Cigar starts with a subtle spice with an unexpected leather profile. This flavor profile remained through the first third of the cigar with the spice becoming more pronounced as I approached the half way point. The strength profile in the first third was actually very mild, while I was expecting a medium bodied smoke. Definite spice in the nose, but not overpowering.

Continuing flavor: At the halfway point spice has become the dominant flavor and almost smacks you in the face, with a brief flavor of nuts. Spice has increased and is left on the tip of the tongue and lips after exhale. All leather notes have dissipated and given way to a robust spice and earth flavor with notes of wood and tobacco. The strength profile at this point has reached a medium body and is beginning to smoke like a Maduro.

Ending flavor: In the final third of the cigar the flavor balances to a pleasing mix of spice, earth and tobacco with a hint of cocoa finally making an appearance. The strength profile remains a mild-medium to the end. The final draw on the cigar leaves an after taste of subtle spice with sweet tobacco.

Light: Very easy light which was achieved quickly and started even (cigar was lite by match stick). Cigar did not require relighting during the course of smoking.

Draw: Draw was perfect, not too loose nor too tight – smoke flowed at a steady rate on draw and made for a pleasurable experience.

Smoke: Cigar produces a creamy smoke which has a pleasant sweet tobacco aroma about it despite the flavor profile of predominant spice.

Texture: Texture of the cigar is smooth producing a very creamy smoke with little effort on the draw.

Balance as smoked: The flavor of this cigar was almost a roller coaster – it started with a pleasing balance of spice and leather flavor which suddenly exploded with robust spice towards the end of the first third and remained until half way through the second third before the spice began to mellow and notes of earth and tobacco became present. Then in the last third everything began to blend together making for a pleasant mix of spice, earth and tobacco with a hint of cocoa.

This cigar was not what I expected from a Maduro – the presentation is beautiful and the construction of the cigar is flawless, however the flavor and strength profile leaves me wanting more. The flavor profiles of the cigar changed rapidly without much blend in the first half of the cigar. It redeemed itself in the last half when the flavors finally blended together and made for a pleasant smoking experience. The strength profile started very mild and seemed more like a Connecticut than a Maduro and then gradually increased as I reached the half way point of the cigar and it achieved a medium body about it which remained throughout the rest of the cigar.

I would put this a second shelf cigar – while the appearance and construction of the cigar meet the standards I would expect from a Rocky Patel the overall flavor and body of the cigar don’t match my expectations of a Maduro. Don’t get me wrong, the cigar is a pleasurable smoke and I enjoyed smoking it – it’s not something I would classify as a celebration or special occasion cigar, nor would I put it as a low as an everyday smoker. If you are looking for a medium bodied cigar that has a tendency towards spice, then this is right for you. I’m anxious to see what some time in the humidor will do to this particular stick because I think it has more potential given the time to rest and age properly. In the end, you can’t go wrong adding a box of these to your humidor for the occasional smoke. I grade this cigar a B+ with an overall score of 87/100. 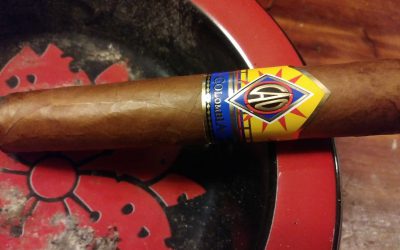