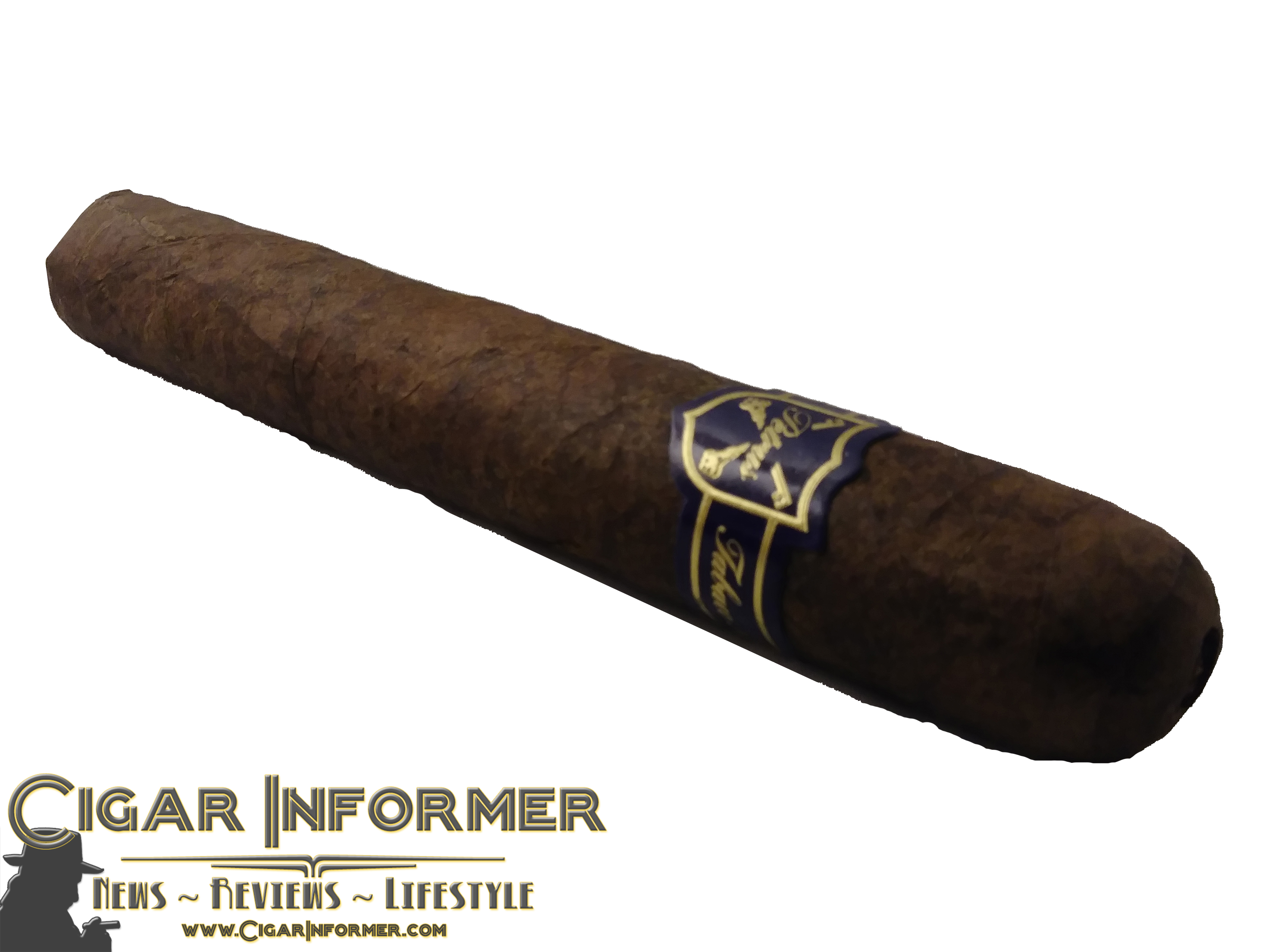 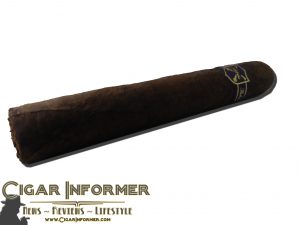 Heft:  This cigar is well constructed, so well in fact that we were hard pressed to even see the seam lines of the wrapper and cap! The cigar doesn’t have any noticeable bulges or soft spots. The roll is a little spongy throughout the cigar however, more so at the foot, but not as firm as many premium blends – the wrapper has an almost suede feeling about it and is noticeably oily. During smoking the spongy feeling of the cigar increased and felt very soft in the fingers. The cigar didn’t form any definite soft spots, but didn’t quite have that premium cigar feeling when rolled in the fingers. 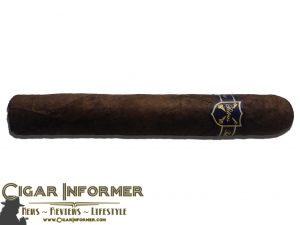 Appearance:  This cigar is a beautiful specimen. The wrapper is flawless with small veining and a tight wrap around the cigar with no rips or tears. The cigar has a very uniform roll from head to foot, with nearly invisible seam lines. The wrapper is an incredibly dark chocolate brown with uniform color and no blemishes or discolorations and a slight oily sheen about it. The cap appears to be a double cap, not as impressive as a traditional Cuban triple cap, but the application is so well done that the cigar looks like the wrapper rounds out and is all one piece – this cigars construction and appearance is quite impressive.

Construction:  The construction of this cigar is flawless, with no rips, tears or other blemishes in the wrapper. Pre-light the cigar is a perfect example of what a quality cigar should look and feel like and I am anxious to see if the construction holds up during smoking. I decided to punch cut this cigar, as is my preference for larger ring cigars, which was accomplished without incident and was quite easy using my bullet punch. The punch cut has confirmed my suspicion that the cap is only a double cap, that or the Oscuro wrapper is quite thin, as there is a very thin level of tobacco between the cap and filler.

Lighting of the cigar is quick and effortless and the burn begins pretty uniform. The cigar maintained its pre-light construction characteristics without splitting, cracking or unraveling during the smoking experience. Despite the cap being fairly thin, there were no issues with the head until I reached the final third of the cigar, and the cap started to come away from the cigar and the head got really loose. 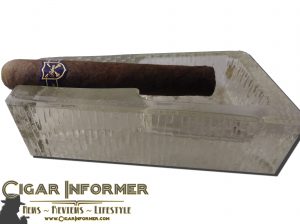 The ash of this cigar was a cement gray color and very loose – I was honestly surprised at how well the ash held on considering how loose it looked and how much the outside ash frayed away from the body. The first ashing occurred at about two inches into the cigar, again surprising me that it held on so long. The ash maintained this loose, frayed appearance throughout the smoking experience. Second ashing occurred around the half way point, not hanging on near as long as the first ash. The final ashing occurred with about a little over an inch of the cigar remaining, and was the last ashing before putting the cigar down.

Overall the construction of this cigar and its appearance was beautiful, however the fill of the cigar and the feel of it in the hand was lacking compared to most premium cigars. The loose fill of the cigar was completely evident by the appearance of the ash, and also impacted the smoking time of the cigar. A cigar of this size I would expect to smoke for a minimum of an hour and thirty minutes, however this cigar smoked in about the same time as a smaller robusto cigar, with a total smoking time of only about an hour. 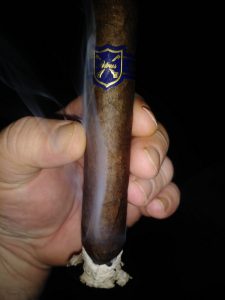 Pre-Light Flavor:  The pre-light flavor is close that that of the aroma, with a more noticeable presence of earth and tobacco and less flavor on the tongue of the baking spices. While pleasing even before putting flame to it, I am hoping that the baking and herbal spices and chocolate notes from the aroma are present during smoking. 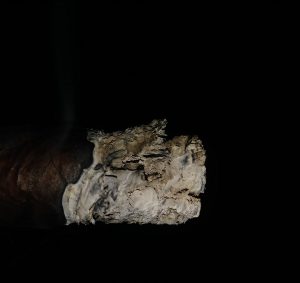 Beginning flavor:  The beginning flavor of this cigar was an immediate disappointment – the pre-light flavors of earth were predominant, with a mix of hay and barnyard on the undertones. I was really hoping for the baking spices and chocolate to make an appearance however these flavors never entered the mix. Flavors are quite mild, as is the body of the cigar – I was expecting bolder flavor considering the pre-light draw and aroma. Half way through the first third notes of wood and pepper enter the palate, with the earthy notes in the background.

Continuing flavor:  Moving into the second third of the cigar, the pepper has subsided and now earth, hay and wood are in the forefront of the palate. Still no baking spices or chocolate as indicated by the pre-light aroma. The flavors again flip flop back to a predominant peppery spice moving in to the last of the second third, with the earthy tones and wood in the background, now a little hint of leather is in the undertone as well. The flavor profile on this cigar is like a merry-go-round, I keep seeing the same things over and over. At least the flavors have increased in intensity and are now more pronounced. The body of the cigar has moved up a notch to medium by this point. 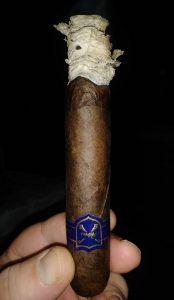 Ending flavor:  Moving into the final third the pepper has become more intense with a long finish lingering on the lips and in the nasal. The earthy flavors are pretty much gone now, however wood and leather has become more pronounced and is definitely present with the pepper. The cigar finishes with strong pepper, wood and leather, and absolutely zero baking spices or sweetness about it.

The flavor of this cigar was a complete disappointment – the pre-light aroma and draw gave indications of a nice baking spice, chocolate and a hint of sweetness, but I was left with a smoke that couldn’t make up its mind of whether it was a spicy peppery cigar or an earthy, grassy cigar. I enjoy notes of wood and leather in a smoke, but personally think they go better with nutty, buttery, creamy flavors. The grassy barn yard flavors were a strong turn off for me. Light:  Very easy to light this cigar, a few seconds with the torch and the cigar was lit around and burning well. The burn started pretty even and maintained an even burn until about the end of the second third when the burn formed a perfect 45-degree angle and didn’t correct itself through the end of the smoke. This cigar did not require a relight during its smoking, however about the time of the burn going sideways it did seem to have less combustion for a few draws before returning to its normal burn. 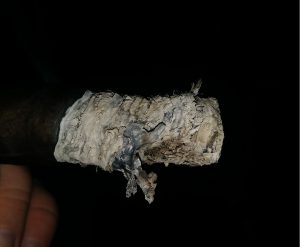 Draw:  The draw on this cigar is very smooth and open, allowing for an easy smoke with very little effort and maintained this draw throughout the entire smoking experience. I am happy that I decided on using a punch cut and not clipping the cap or using a v-notch cut as the cigar was very open and I think anything more than a punch cut would have been overwhelming.

Smoke:  The smoke itself is a light gray, thick smoke that hangs in the air and produces a surprising aroma of fire cured tobacco, which made absolutely no sense to me considering the cigar had no fire cured flavors or pre-light aroma – the smoke also had a mix of straight tobacco and wood aromas about it, making it a pleasing aroma but one that didn’t match the smoking experience in any way. 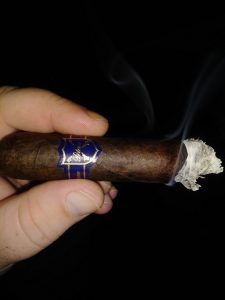 Texture:  Smoke texture is thick in the mouth and creates a nice thick cloud on exhale. On a retro hale the smoke feels thick through the nasal, hangs in the air and is slow to dissipate.

Balance as smoked:  The balance of this cigar was pretty insane – a constant flip flop of flavors that seemed like it couldn’t make up its mind on whether it was a peppery cigar or an earthy cigar. The beginning of the cigar was fairly weak in flavor and body which set the tone for the entire experience. The transition of flavors was fast and sporadic, with no real concern on the ease of transition. The cigar started as a very mild smoke and turned to a mild-medium body by the halfway point and maintained this strength through the end of the cigar. It wasn’t until the end of the second third that the flavors really became bold and tasted more than an afterthought. 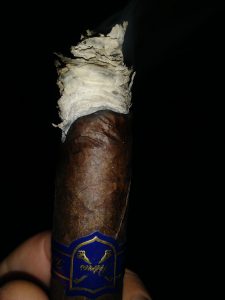 I was really looking forward to this cigar based on the amazing aroma it had coming out of the cellophane, an aroma that had me salivating at the flavor potential of the cigar. I was left baffled and disappointed at how a cigar that smelled and tasted so good before being lit could turn out to be such a flop during smoking. The old saying of don’t judge a book by its cover is definitely applicable in this case. 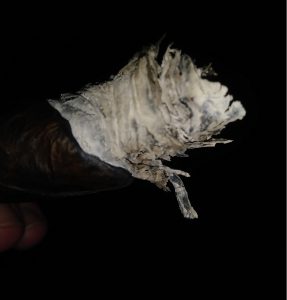 The appearance and presentation of this cigar was flawless, it looks like a premium top shelf cigar and is just beautiful. The construction is great, and had the cigar been fuller it would have been perfect from a construction and appearance point of view. I was pleased that the cigar maintained it construction through till the end and even more surprised that with such a thin cap that I didn’t have cap issues sooner. I was both disappointed about how fast it smoked for a large ring cigar, but at the same time relieved to get off the flavor merry-go-round of this smoke.

The flavors of the cigar were not well balanced at all which is the most disappointing aspect for me about this smoke – had the cigar maintained one theme of flavors throughout the smoke then I could have enjoyed this cigar more, but the constant back and forth between earthy and then peppery was a head spin – starting out with one profile and then easing into the other would have been better than the back and forth. 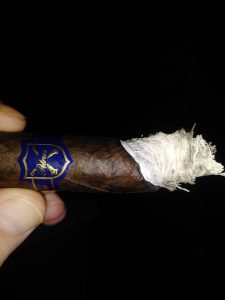 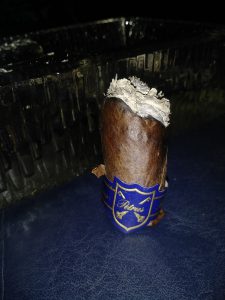 This is one of those cigars that you throw in the humidor for when you have buddies over that don’t know a good smoke from a horrible smoke – it looks great, smells great and to a less experienced smoker it might even taste great to them. Now don’t get me wrong, the flavors in the cigar were good, however they didn’t mix well, didn’t transition well. This might be a good smoke for those days your running the mower and don’t really care what you’re smoking, because its definitely better than a gas station cigar, but just not one that I would keep in my rotation. Its one of those looks better than it is, like a movie that has amazing previews, but the previews were the best part of the entire movie! Now I’ve only found two online retailers that carry this cigar, Cigar Page and Mars Cigars – they run $15 for a 5 pack at Cigar Page, less for smaller sizes and less than $30 for a bundle of 20. Maybe a different vitola will produce different results, but I’m hesitant to spend any more money on a 5’er of toro or robusto size sticks to try them – I suppose at the dirt-cheap price point it wouldn’t hurt to give them a shot, but its not likely. In the end I give this cigar an C+ rating with a final score of 78/100.