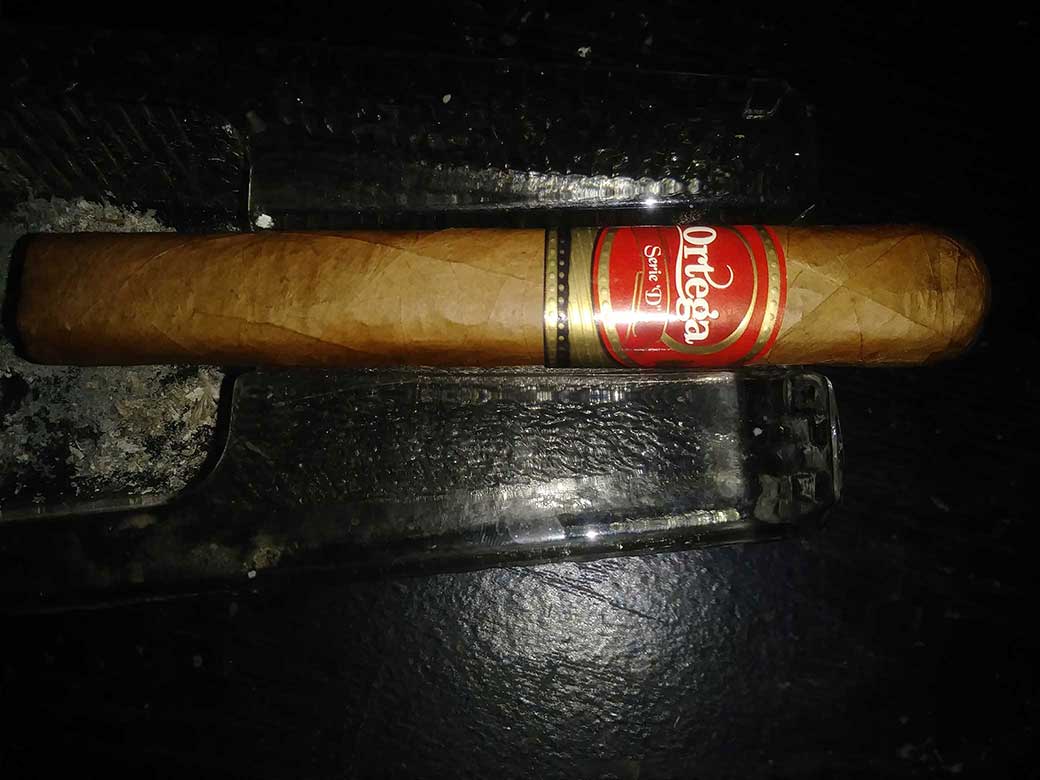 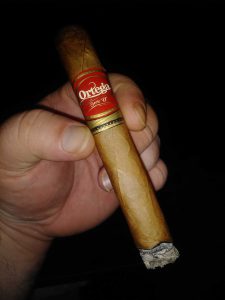 Today we reviewed the Ortega Serie D Natural No. 8 which is a robusto size box pressed cigar featuring an Ecuadorian Habano wrapper covering a Nicaraguan binder and Nicaraguan long fillers. We received this cigar back in December of 2017 from a fellow lover of the leaf, and based on the color of the cellophane we are assuming they had it in their humidor for at least a couple years before gifting it to us. Finding the Serie D in the Habano wrapper online with the popular retailers is a hard feat, however we found many retailers that carry the maduro wrapper of this same cigar. It is still listed on the Ortega website, so maybe this particular blend just hasn’t been as popular as the maduro wrapper version. 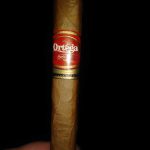 This is a nice, box pressed cigar with a natural Habano wrapper which has a nice dark tan color about it. The wrapper was uniform in color and had small veining, without any large veins or blemishes in the wrapper whatsoever. The appearance of the cigar is amazing and the box press was flawless and very defined.

In the hand the cigar is firm with a uniform fill and roll about it, there are absolutely zero soft spots or bulges in the cigar, very streamlined and straight. There was a small nick in the wrapper by the foot which I think happened when I pulled the aged cellophane from the cigar. Other than that, the cigar has no blemishes, rips or cracks in the wrapper. The concern I do have is that the cap and wrapper seem loose, as if there was not enough glue applied during construction. I am concerned that this will cause burn issues while smoking, or worse, result in unraveling. Considering how perfect this cigar looks, this flaw in the construction is disappointing.

I decided to punch cut this cigar for fear that using a v-cut or traditional straight cut would result in damage to the loose cap. I used my new triple flame torch from Newport Zero with this cigar, which has a convenient cigar punch integrated into the bottom of the lighter. The punch cut was achieved without issue and the cap held together – this cigar appears to have a traditional triple cap, just a loose application on the bottom layer.

Lighting the cigar was done with my triple flame torch without issue, the cigar started with a little of an uneven burn which quickly corrected itself without having to touch it up with the torch – so far so good – the burn remained fairly straight through most of the cigar until the final third when it began to canoe ever so slightly, by this point there was little point in attempting to correct the issue as I was already within an inch and a half of the end of the cigar.

To my complete surprise and delight, the cigar did not develop any construction issues while smoking, even the cap remained intact despite the loose fitting. I was almost sure this cigar would develop an issue, but not only did it not unravel but there were no developments of cracks or splits in the wrapper either.

The ash of this cigar was fairly loose looking, with a salt and pepper appearance and the cigar ashed about every ½ to ¾ inch. This was surprising to me as the cigar felt very full and compact, I would have expected to get good ash hold in this cigar. The draw on the cigar was easy and not obstructed, it wasn’t full open but not closed either, it was a flawless draw, perfect in my opinion.

Overall the presentation of this cigar was very nice, despite the one blemish in the wrapper and the obvious looseness of the cap and limited glue application. With only one major burn issue towards the end of the cigar I am thankful as this could have turned into a disaster a lot sooner. A little more attention to these issues would have been appreciated, however overall this is a very good-looking cigar. 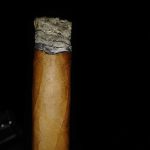 Upon lighting the cigar, I am greeted with an odd mix of a dark molasses, earthy tobacco, a faint citrus undertone and spiced tea. This crazy combination of flavors actually mixed well together and oddly worked. These flavors lasted about halfway through the first third before the molasses and citrus started to fade away and pepper and wood entered the flavor profile, mixed with the spiced tea. As I neared the end of the first third the pepper started becoming more pronounced and moved to the dominating flavor.

The flavor of this cigar started with a “what in the world” mix of flavors, which oddly worked together and wasn’t an immediate turn off. The flavors were pretty balanced up until the halfway point of the cigar when pepper seriously dominated and pretty much washed out the other flavors – literally, pepper bomb is a true description of the second third of this cigar. The transitions of flavors however were very balanced and not sudden, there was smooth as flavors changed. I really enjoyed the spiced tea flavors which while present from the beginning became more pronounced at the end. It was reminiscent of a chai tea, which to me balanced really well with the wood and leather notes. This was a complex cigar as far as flavors go, however the transitions were pretty balanced and with the exception of feeling like I was smoking a pepper mill in the middle of the cigar, the flavors were well balanced 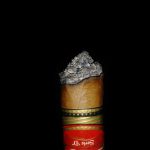 The smoke produced from this cigar was thick and creamy and produced a very woody aroma with a mix of leather and tobacco smells, which I found quite pleasing. The smoke lingered in the air, and felt smooth and creamy on the exhale.

The balance of the cigar was pretty good, starting as a medium body the cigar was at a medium-full body by the halfway point. There was a definite build up in the strength of the cigar, not a sudden change from one level to the next. Moving into the final third I personally thought the cigar gradually moved back to a medium profile for the finish, which worked will with the flavor profile of the final third.

The draw on the cigar was spot on, easy to smoke and never plugged. The cigar maintained its full feel and the burn remained pretty spot on until the end. Overall this cigar performed the way you would want a cigar to smoke. 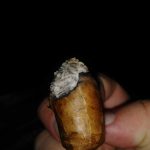 This is a very nice cigar which provides a pleasurable smoking experience. If you are a fan of very peppery cigars then this cigar will definitely be in your wheelhouse, for me personally the pepper bomb half way through the cigar was almost over powering. I was pleased that the pepper mellowed out near the end of the second third and I was very pleased with the ending flavor of this cigar. Even more impressive for me however was that the cigar held together all the way to the end. I was sure that this cigar was going to have construction problems due to the lack of glue application, so being able to finish this cigar was both a surprise and a delight. It would have been nice if these issues weren’t present to begin with however.

I would classify this as a second shelf cigar, this isn’t a world class cigar you want to save for a special occasion, but it isn’t exactly an everyday smoke you would want to waste on mowing the grass either. This is a cigar that is best enjoyed after a good dinner, as the power of the cigar does ramp up pretty high and the nicotine hit it provides in conjunction with the intense flavor could be a little much for a middle of the day cigar or a smoke on an empty stomach. Overall, this is a nice cigar to have in the humidor and one that deserves a place in any smoker’s lineup, even if its not on regular rotation. The Ortega Serie D Habano receives a B+ rating with an overall score of 87/100