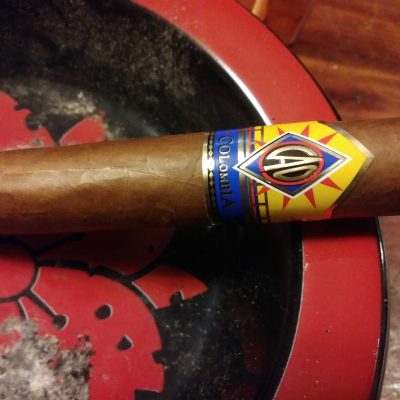 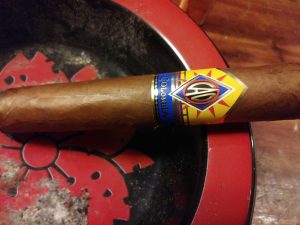 This is a well-constructed cigar; however, the veining is significant with small and medium size veins throughout the leaf. The construction of the cigar was perfect, no rips or tears in the wrapper, no malformities at the foot or head, the cigar had a uniform feel without soft spots or bulges. The wrapper leaf was free from blemishes or color variations, and has a nice, deep tan coloring about it with a medium tooth to it.

I decided to punch this cigar rather than cut it, and the cap plug that came out was thick, clearly indicating a triple cap application. The cap maintained perfect construction throughout the smoking experience without unraveling or otherwise coming loose from the cigar.

Lighting of this cigar was easily performed with my triple flame torch – while the burn started out nice and even, this would not be the case for the remaining of the cigar. By an inch in the burn was uneven, wavy and even dangerously close to canoeing for the remainder of the cigar. While smoking I had to touch up the cigar to try and correct the burn and prevent a full-on canoe burn. This was disappointing as I generally have very good results with CAO cigars. While the cigar construction remained perfect without unravelling or splitting throughout the smoking experience, the constant uneven burn was a huge annoyance.

The ash on the cigar is a mottled gray, black and dark gray pattern, and was unfortunately very loose resulting in the ash falling off the cigar about every inch. As can be seen in the photographs, the ash fluted out like petals on a flower, and was not very tight in any regard. This resulted in quite a few occurrences of getting ash everywhere as it fell off the cigar at inopportune times.

Overall the construction of this cigar was outwardly good and the cigar looked really nice, however the performance of the burn left something to be desired. 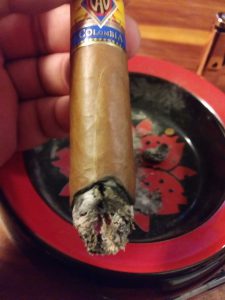 The pre-light aroma of the Columbia provided me with a baking spice aroma from the foot of the cigar, with nuances of baked bread. Intermingled were the obvious aromas of tobacco, but there was a faint smell of something citrus in the mix as well, almost not noticeable. The pre-light draw provided more of the baking spice and baked bread taste and now the citrus aroma is present on the palate.

Lighting the cigar, I am immediately greeted with more of the citrus taste with hints of baking spice, wood and a buttery toast taste. The cigar starts mild in body and the aroma from the smoke is that of tobacco and fresh from the oven cake. This flavor profile of remains consistent throughout the first third of the cigar, with an increase in the baking spice and wood flavors as I get closer to the second third.

Moving into the second third of the cigar there is an essence of pepper which has entered the flavor mix, with wood moving forward and the citrus taste moving to the background. The buttery toast flavors have faded completely at this point as I hit the middle of the cigar, with pepper becoming predominant, and a mix of wood and now leather on the palate as I approach the final third of the cigar.

Beginning the final third the pepper has actually mellowed quite a bit, allowing for a return of the original citrus and buttery toast flavors with a background of wood and leather which remains throughout the remainder of the cigar until I put it to its final rest.

The flavors of this cigar were pleasing and well balanced, without any sudden or harsh changed in the flavor. I was pleased that the pepper was not overpowering, and that while it made a long appearance, it did not overpower the other flavors in the cigar, but worked with them to create the profile. Overall the flavors of this cigar were very nice, well balanced and perfect for a middle of the day, after lunch cigar, or something to enjoy on the golf course. I would smoke more of these, and look forward to seeing what a good 6-12 months in the humidor does for them. 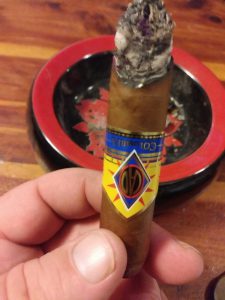 Lighting of this cigar was an easy task, given the robusto size it doesn’t take much to get it going, and when you’re using a triple flame torch it makes the job that much easier. The disappointing point of this cigar was the almost immediate flaw in the burn line and the constant need to touch up the cigar to prevent it from canoeing. Looking over my smoking notes I logged a total of four times that I had to touch up the cigar, and the burn never evened out to a straight burn despite my efforts.

The draw on this smoke was pretty good, a little tighter than usual which I suspect is due to the punch cut. Had I v-notched or straight cut this cigar I think the draw would have been quite open. I prefer punch cutting my robusto cigars, however I think in the future I would probably v-notch this particular vitola.

The smoke produced from this cigar is not as thick as other cigars I have smoked, and seems to dissipate fairly quickly, however the room note it leaves is a pleasing mix of tobacco, wood and baked goods; the entire smoking experience had me thinking of the smell of a bakery with fresh breads and cakes from the oven. Combined with the flavor profiles of the cigar, it was very enjoyable. Coming across the tongue and lips the smoke is creamy yet a little thin, and the feeling through the nostrils is faint, not very full.

The balance of the cigar was very good, without sudden changes in flavors or body. The entire smoke maintained what I would consider a mild body, borderline on medium. The flavors in the cigar never tasted like it was too much, or too little, but maintained a nice balance resulting in an enjoyable experience. 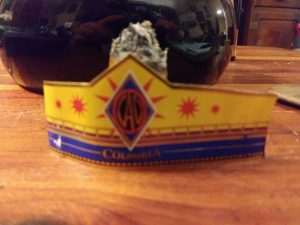 This cigar was both enjoyable and a total pain in the butt at the same time – from the aspects of construction, appearance, flavor and aroma, this cigar was great, however in relation to how the cigar performed, it was horrible. This cigar was a love hate experience for me as I loved how it tasted, was in complete enjoyment of the room note, but was annoyed to no end with the burn issues and constant ashing of the cigar. This was one of the messiest cigar experiences I have had in awhile due to the ash just not holding onto the cigar.

This is a good middle of the road, second shelf cigar, it’s not top shelf or something that I would classify as a celebration cigar, but if you want something with good flavor, a mild to medium body and affordable then this would be a good cigar to consider. I think if the cigar didn’t have the burn issues it had that it would have been a more enjoyable experience, and based on the ashing issues, it would be suited for an outdoor activity like the golf course or fishing. Overall, I give this cigar a B rating with an overall score of 83/100.