Every so often we like to spice things up a bit and feature some items that are luxury, unique, rare, hard to find or otherwise just really awesome! So tonight we present the Cigar Informer Cigar Deals Extra Edition: Unique and Rare! Here we will be looking at some of the most unique and rare blends available to buy on the net today and we’ll even tell you where to get them! Fair warning – while we have included this Extra Edition in our Cigar Deals category, don’t expect to get off cheap here – these are some of the rarest blends available and if you want them, it’s going to cost ya! It takes a lot of something to claim you’ve made the most exclusive cigar in the entire world, but I’ll be damned if Daniel Marshall ain’t got what it takes – the Daniel Marshall 24kt Golden Torpedo Cigar. These cigars are enjoyed by big-name celebrities, Presidents, titans of industry, film and music. Each Daniel Marshall Red Label 24kt Golden Torpedo comes wrapped with over 50 individual pure 24-karat gold leaves from Italy. The Golden Torpedo is 6.25″ x 54 ring and is meticulously rolled in Nicaragua at the famed Plasencia factory in collaboration with cigar legend Manuel Quesada. Each Daniel Marshall Red Label 24kt Golden Cigar comes in it’s own beautiful, hand-made Spanish cedar box, hand signed by Daniel Marshall. All the tobaccos in these cigars are aged over 5 years before being rolled to create a cigar that is smooth and complex with notes of chocolate, espresso and spice throughout. To finish off this impressive cigar, the 24kt Italian gold leaves are wrapped around the cigar by hand, creating the perfect cigar. Extremely unique and extremely limited means you’re going to pony up the big bucks if you want this cigar – about $215 for a single stick to be precise. You can get this insanely rare and unique cigar from Cigar Reserve are their website here: Daniel Marshall 24KT Golden Torpedo Cigar *Autographed Box* So for something a little more affordable we present the Warped El Oso Ursus 2016 Limited Edition. Rolled at the esteemed El Titan de Bronze factory in the historic neighborhood of Little Havana in Miami  – El Oso, or “The Bear”, is rolled by true category 9 cigar rollers from Havana, Cuba. Each El Oso utilizes true Cuban techniques such as entubado bunching and the classic Cuban triple cap. The El Oso Ursus is a closed foot Corona Gorda 5 5/8 x 46 and are wrapped in an oily and dark brown Ecuadorian Habano Oscuro leaf. Only 250 ten count boxes were produced and blended by Kyle Gellis at El Titan de Bronze. The Warped El Oso Ursus delivers a prominent sweetness, spice, and cocoa which comes from the wrapper and a good amount of bodied delivered by the filler making this truly an outstanding smoke from this ultra boutique cigar maker. At a price point of about $13 per stick you can get your hands on one of these boxes of very rare cigars over at Cigar Reserve by visiting their listing here: Warped El Oso Ursus 2016 Limited Edition – Box of 10 Another rare blend that won’t break the bank is the Pappy Van Winkle’s Family Reserve Churchill. The Pappy Van Winkle Barrel Fermented cigar is a 100% long-filler, premium cigar made totally by hand in very small batches at Drew Estate in Estelí, Nicaragua. This historic cigar features a barrel-fermented-, tapa-negra-style wrapper over a Mexican San Andres base wrapper, as well as aged Nicaraguan Filler tobaccos. The strength level of the Pappy Van Winkle Barrel Fermented Cigar is “Medium Plus,” which allows both new smokers and experienced aficionados to enjoy the blend. It’s a well-rounded, sophisticated cigar, with body and a hearty expression. Released in 2016 The Pappy Van Winkle comes in a lined, custom wooden box with 10 Churchill size (7 x 48) cigars and you can get in on these fantastic smokes for $169 over at Cigar Reserve, but be warned, they are in extremely limited supply so take a look today at: Pappy Van Winkle’s Family Reserve Churchill – Box of 10

Now we’ve seen rare and unique, but topping the charts would have to be this insane collection of the Monster Series cigars by Tatuaje which is likely the rarest collection of cigars on the market, at least that not in the hands of a private collector! Each year since 2008, Tatuaje has released only 666 “dress boxes” of a Halloween based character with 13 cigars in each box. These 666 boxes only get distributed to 13 stores through-out the country and sell-out before they even go on shelves! Virtually impossible to find, let alone the collection completely unopened! This collection includes 10 full and unopened dress boxes for years 2008 through 2016 as follows:

This is so rare in fact that Cigar Reserve doesn’t even have a price listed for this collection – however they ask that only serious buyers call them to inquire about price and terms! See this insane collection of highly prized cigars here: Monster Series by Tatuaje Collection

If you’ve got money to burn then the Gurkha His Majesty’s Reserve might be right in your wheelhouse – holding the title of “world’s most expensive cigar ever made”, if you are looking for the absolute best, this is it. His Majesty’s Reserve is made from the most expensive cognac and premium tobacco in the world. Starting with a rare aged Dominican wrapper that covers a secret blend of filler tobaccos from all over the world, once the cigars are rolled they then undergo a unique infusion process that involves an entire bottle of Louis XIII Cognac. This infusion process is very unique in that it does not take away from the tobacco flavor of the aged leaves, but rather complements them in grand fashion. Fewer than 100 boxes of His Majesty’s Reserve are produced every year and the allocation of these rare gems is decided by Gurkha President Kaizad Hansotia himself! So just how expensive is the most expensive cigar ever made? Try $750 for a single cigar – really got money to burn? You can buy a box of 20 for $14,750 (yea…that’s fourteen thousand seven hundred fifty dollars!). Available online from Cigar.com as part of their Luxury Collection, you can view this insanely expensive cigar here: Gurkha His Majesty’s Reserve 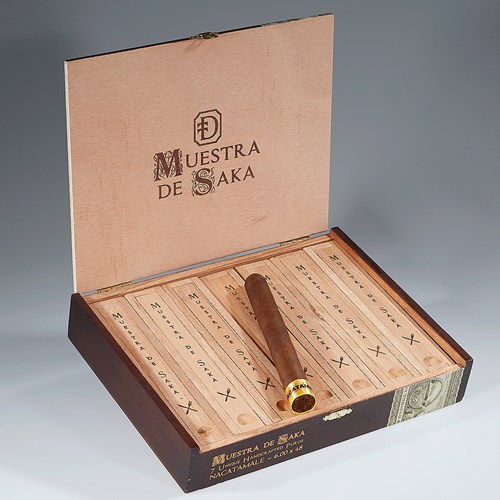 Now that we’ve had our heads in the clouds with that Gurkha, lets come back down to ground here and take a look at the Muestra de Saka from Steve Saka. Crafted at the Joya de Nicaragua factory, these cigars are brimming with Nicaraguan long fillers and wrapped with an Ecuador Habano leaf, making them rich and spicy, with notes of cedar, baking spices, black pepper, and some espresso. This masterpiece comes in seven-count boxes, with each packaged in its own coffin. Extremely hard to find, but worth every effort, this is one premium that you must try – and you can try it for not a lot of money! Another from the Cigar.com Luxury Collection, you can grab a box of 7 of these rare sticks for a cool $94.95 – view the listing here: Muestra de Saka 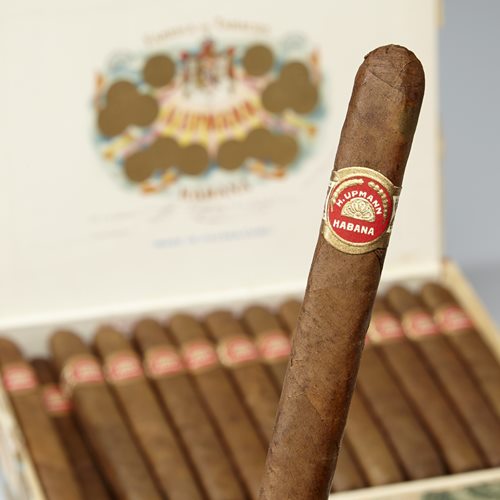 No that is not a typo – these H. Upmann Belvederes are pre-embargo gems from Havana are a pre-revolution premium cigar from a company that was established in 1844. Among the oldest cigar brands in the industry, H. Upmann is credited with numerous innovative packaging inventions including the cedar cigar box! Comprised of tobaccos from the famous Vuelta Abajo (Pinar del Rio) region of Cuba, these are an incredibly rare vintage cigar and an integral part of cigar history which you can own for $275 per stick. See them over at Cigar.com here: H. Upmann Belvederes circa 1953 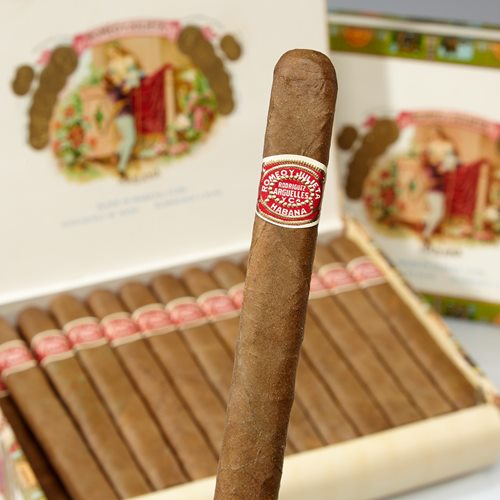 Adding to the rare and vintage selection we present to you the Romeo y Julieta Corona from the 1950’s – another pre-revolution Cuban brand that uses tobacco from the premium Vuelta Abajo region, the Romeo y Julieta was noted for winning numerous awards at tasting exhibitions, specializing in figurado sizes such as perfectos and piramides, as well as being Sir Winston Churchill’s brand of choice. The brand was heavily promoted for wealthy Europeans and thousands of personalized sizes, bands, and boxes were made for the rich and famous. These coronas were packaged in beautiful boxes of 25 and properly stored, remaining in mint condition. If you’ve ever dreamed of a chance to taste the best of what Cuba had to offer during their heyday, this is it – but it’s going to cost you $400 per stick from Cigar.com – you can view them here: Romeo y Julieta circa 1950s

Well I hope you have all enjoyed this Extra Edition of the Daily Cigar Deals – be sure to check in with us daily as we cruise the net looking for deals and steals on our favorite smokes, that unlike the smokes in this article, won’t break the bank! 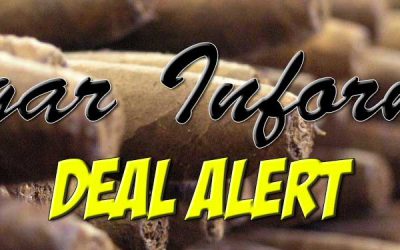 You’ll be stuck between a Rocky and a hard place when you try to decide what mazo’s to snag up in this Rocky Patel Vintage Meltdown sale going on...

Right now, you can score a 10 pack of the highly rated Avo Syncro Nicaragua in robusto size for only $39.90 shipped to your door. This box-pressed...